This is an excerpt from the first book in my Jerky Maker Series called Ground Beef Jerky: How to Make Great Tasting Beef jerky Using Ground Beef, and it explains some of the many benefits of making your own beef jerky. Enjoy.

Here are my 10 best reasons to make your own beef jerky at home. Here you will learn why making your own jerky using ground beef is so much better than the store bought stuff. 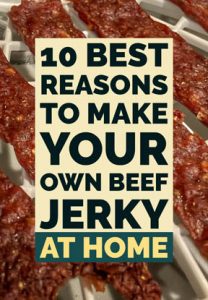 One of the first things you’ll notice right away is that homemade beef jerky is much less expensive than store-bought beef jerky. Nobody really pays attention to those packages at the store. Sometimes they are humongous, but when you look at the actual amount of jerky that you get, it’s very small.

The next time you’re at a store, pick up one of the biggest bags of jerky you can find. Then, feel down at the bottom for the actual amount of jerky that’s inside.

Finally, look at the ounces, and it’s pretty easy to figure out from there how much you’re paying per pound.

In most cases, beef jerky from the store ranges between about $20 and $30 a pound. In some cases, especially with fancier types of beef jerky, you can pay $40-$60 a pound.

That’s a huge amount of money for a snack, but if you start making it yourself, you’ll be able to make 3 to 5 times the amount of jerky for the same price.

Another reason to make your own beef jerky at home is that it tastes better than the stuff you buy at the store.

Even your favorite brand of beef jerky doesn’t stand a chance against homemade beef jerky using ground beef, your own spices, and your own recipes.

You don’t even need to practice a lot, or really understand too much about cooking in order to be successful. All you need to do is follow the recipe formula that I’ll share with you in the book, and you’ll have everything you need to make great tasting and reliable beef jerky recipes. 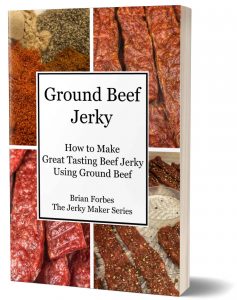 Next, one of the most interesting things about jerky made with ground beef is that you no longer have to gnaw on your jerky like a dog chewing on a bone. Since the meat has already been ground up, there is nothing difficult to bite through.

There is still that trademark jerky feeling when you bite into it, but after that, it’s very easy to chew.

I’ll definitely confess, I really like beef jerky, but sometimes after eating several pieces of traditional jerky, my teeth and gums can hurt a little bit. It’s the constant mashing and grinding and pulling that just irritates my teeth after eating too much whole muscle jerky.

With ground beef however, you can eat it by the bowlful, and because it chews up so easily, you never experience the same irritation.

No Preservatives in the Recipes

A huge advantage of making things yourself is that you know what’s inside of it. In order to keep beef jerky on the shelf, and keep it from going bad, lots of preservatives and chemicals need to be added to the meat.

This means you get the pleasure of eating all of those preservatives and chemicals as part of the experience.

Homemade beef jerky doesn’t have any of those preservatives in the recipe, and only uses a little bit of curing salt to help keep it safe to eat for a little bit longer.

The downside is that homemade jerky doesn’t keep nearly as long as the store-bought variety, but once you taste it, you won’t be worried about needing it to last more than a day or two.

It’s a surprise to most people, but lots of store-bought beef jerky companies use chemical flavorings in order to give their product its trademark taste. Some of these are absolutely delicious, but unless you do your research, you really don’t know what they are, or where they come from.

Making jerky yourself, the odds of you seeking out hard to pronounce and difficult to find chemical flavorings to use in your jerky instead of just using the spices that you already have in your cabinet is pretty low.

This means you don’t have to worry about having added chemicals and flavorings of a possibly questionable origin in your food.

That should make you happy, and is yet another reason why you should be making your own beef jerky from ground beef.

One of the biggest advantages to making your jerky is that you can use common household spices in the recipes.

The only thing you really need to buy that is a little special is the base mix, but that’s inexpensive, easy to find, and even the small packages last a very long time. You can also make your own with my base seasoning recipe.

If you do any kind of cooking at all in your home, you probably have a basic set of spices which likely include garlic, onion, salt, pepper, some sort of hot pepper, parsley, oregano, basil, etc.

It’s actually pretty amazing what you can do with just a few common household spices and it’s even more amazing to find out that most of the seasoning blends that you buy are actually just combinations of those same basic spices that you already own.

This means you probably have the ingredients that you need for the majority of these recipes already in your house. Even if you don’t, buying them is inexpensive, because you can find most common spices in the grocery store for a couple dollars, and sometimes even less. That’s great, because it means to be able to get lots of different ingredients without spending a ton of money.

Full Control of the Ingredients

It’s a huge advantage to have full control over the ingredients in a recipe. In reality, the only way to economically do that is by making the recipe yourself.

For example, I’m not a huge fan of cumin, even though I know people that can’t get enough of the stuff. When it comes to my recipes, I still want a little bit of that cumin taste because it works with the other flavors and it’s noticeable when it’s gone. However, I usually reduce the amount by half, and that makes the jerky that tastes better for me.

You can do the exact same thing, because you have full control over the recipe. If there’s something you don’t like, just delete it, or use less of it.

On the other side of that coin, if you absolutely love a certain spice, feel free to use more of it in your recipes.

Whole muscle jerky is a completely different animal, and you can invest hundreds or even thousands of dollars on fancy equipment to help you make that type of beef jerky.

If that’s what you want, do it. However, from my experience I’ve discovered that most people just want a way to make some beef jerky at home without having to spend a lot of money, and without having to get so into the hobby that it takes over their kitchen.

Thankfully, in order to make ground beef jerky, you really only need a basic food dehydrator, a jerky gun, and some basic cooking supplies that you probably already have like a mixing bowl, measuring spoons, etc.

You may also be surprised to know that the process for making ground beef jerky is fast and easy. Especially when compared to making traditional jerky, it’s definitely like having an easy button.

You can literally go from deciding that you want to have some beef jerky, to actually eating that beef jerky in a few hours. The prep side may only last about 20 minutes, and then the jerky just sits in the dehydrator for a few hours.

Most beef jerky takes about three hours in the dehydrator, though some recipes that have a lot more liquid can take up to six, which means in most cases you can make your own beef jerky in about 4 hours total start to finish.

In the majority of cases, you’ll dehydrate for about three hours, then check the jerky to see how it’s doing, and it’s usually done at that point.

The fact that it doesn’t take very long is really exciting, because even with a little bit of notice you can have jerky ready for any occasion.

There have been times when I became excited about making a new batch of jerky before I had to go somewhere in the afternoon, so I just made it that morning, and I had it with me in the afternoon. You can see some of my ground beef jerky recipes here.

Finally, making ground beef jerky at home is a really fun hobby, and it can teach you a lot about cooking, spices, and combining flavors. You end up with a great tasting snack as the product of your hobby, and it’s something that you can enjoy with your friends and family.

When compared to most hobbies, beef jerky is not the normal money pit that most hobbies become. In fact, once you have your basic components, the only thing you might buy from time to time is a different spice or seasoning blend.

These can be found for as low as a dollar, and even fancy ones might only be $5 or $10. For such a low price, it’s really easy to try different flavors and styles.

Once you start making your own beef jerky at home, and you taste that very first batch, you’ll be completely hooked on every aspect of the process.

Not only is it fun, it’s also inexpensive, the jerky is better than anything you can buy, and you’ll know exactly what’s in your jerky every time.

That’s the first part of my book, Ground Beef Jerky: How to Make Great Tasting Beef Jerky Using Ground Beef. The book explains every aspect of how to make your own beef jerky, from the equipment and ingredients, to crafting your own recipes and storing your jerky.

If you are interested in making your own jerky, but have been hesitant because of the time commitment, expensive equipment, and complicated process, then ground beef jerky is for you because it’s fast, cheap, and super easy.

If you are ready to start making some of the best beef jerky you have ever made in your life, then The Jerky Maker Book Series is for you!  There are seven books in the series so far, each one filled with everything you need to know to make outstanding ground beef jerky using common ingredients, inexpensive equipment, and with flavor so good you'll never eat store bought jerky again!