One of the best things you can do when making any of my ground beef jerky recipes is to replace the water with beer. Not only does this improve the flavor, but it also adds an interesting twist to the recipe that water just does not provide. Making jerky with beer is easy. Here is what to do, and how to do it. 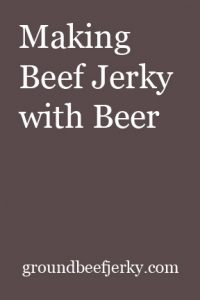 In any recipe, there is a certain amount of liquid that you need to make the recipe work. The spices are dry, so you need some liquid to mix with those spices to help them mix with the meat. The liquid serves more of a utility function than anything, but you can change that by using a liquid with some flavor.

Beer is a great choice, and you can use just about any kind of beer that you like. The easiest way to get started is to just replace the water in the recipe with the same amount of beer, and complete the recipe as normal.

In most recipes, the amount of liquid is just enough to get the spices wet, and when you replace the water with beer, you get a lot more flavor, plus you also get a fullness in the taste of the jerky that you just can’t really explain until you try it.

If you are new to the jerky making process, you can start with How to Make Beef Jerky With a Dehydrator and it will give you a complete explanation of the process.

Which Beer to Use in Your Jerky

The type of beer that you use really all depends on what you are looking for in a final flavor. If you want to get some of that fullness that I talked about earlier into the recipe, then you want plain old lager beer. Good candidates are Budweiser, Miller Lite, Coors Bisque, or Pabst Blue Ribbon.

All of these beers have a very middle of the road generic beer flavor, and they work well to make your jerky taste better. Stick to the same amount as the water in the recipe, and typically 1/4 cup works well in most cases. Anything more can make the meat too loose, and it will not dry as well.

For alternatives to the lager beers, you can use craft beer. The flavors are endless in craft beer, and if you are a big beer drinker, I recommend using the beer that you like the most, and seeing how it works with your jerky. One of my personal favorites to use is Guinness, and it adds a little something more than plain lager beer for sure.

How Much Beer to Use

In the beginning, I tried to get as much beer into the recipe as possible, thinking that it would evaporate the liquid and I would be left with the most flavor. It was a great idea in theory, but in practice it waters down the meat, and makes it hold together poorly.

The strips will also shrivel more, and the texture will not have that beefy chew that you are used to.

I recommend anywhere between 1/4 and 1/3 or a cup, and nothing more. You can go up to half a cup if you have a ton of spices in the recipe, but that would be only for special recipes. Less is more, and in most of my jerky recipes I use 1/4 cup, and have no trouble tasting the flavor.

Getting a Deal on Beer for Your Recipes

One of the ways to get a deal on beer for your recipes is to find the mini cans. It’s a shame to pour out most of a can of beer because you only needed 1/4 cup. Instead, look for the mini cans, and you will have to dump a lot less.

I make my recipes in the morning typically, so drinking the beer is not in the cards. The mini cans give you just about what you need, without a lot of waste.

If you are using a basic lager beer, you can get a pack of cans, which are usually a little less than bottles, and just leave them in the fridge for when you make jerky. I have a case of PBR cans that is in the garage fridge, and I only use them for jerky making. 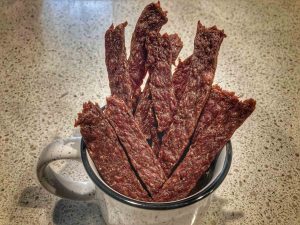 Now that you know you can make a huge difference in your jerky by switching out one ingredient, it’s time to make a batch and try it yourself. I recommend my Cajun Garlic Jerky Recipe, which works perfectly with beer as the liquid ingredient.

This is also one of my personal favorite recipes, and one that I have made dozens and dozens of times. The ingredient list is small, so the process should be easy even for a beginner.

For more recipes, I have a whole series of books called the Jerky Maker Series, and they are a great resource for tons of ground beef jerky recipes and techniques.

If you are ready to start making some of the best beef jerky you have ever made in your life, then The Jerky Maker Book Series is for you!  There are seven books in the series so far, each one filled with everything you need to know to make outstanding ground beef jerky using common ingredients, inexpensive equipment, and with flavor so good you'll never eat store bought jerky again!

We use cookies to ensure that we give you the best experience on our website. If you continue to use this site we will assume that you are happy with it.Ok